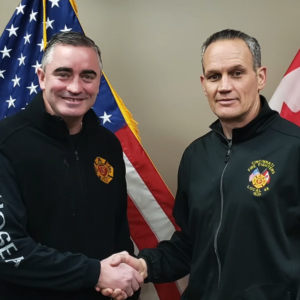 Today, newly elected IAFF principal officers General President Edward A. Kelly and Frank V. Líma officially begin their terms in office, marking a new chapter in our union’s history and for our 324,000 members across the United States and Canada.

Elected by delegates at the IAFF 55th Convention in March 2021 as our union’s 10th General President and 12th General Secretary-Treasurer, Kelly and Líma are ready to lead beginning on day one to build a stronger, more united union with a bright future for the IAFF and our proud profession.

On their first day in office, both Kelly and Líma are on the ground for a rally in Houston, Texas, fighting for Houston Local 341 President Marty Lancton, who was wrongfully terminated for his union activities. Both will speak at the rally later today in a show of support for President Lancton and Local 341. “Our job is to take care of our members and their families. You’ll find us standing with our brothers and sisters, taking the fight wherever and whenever our members are in need,” says Kelly. Both Kelly and Líma are committed to working to address issues affecting IAFF members and to provide support and services to locals in every county, city, town and township in the U.S. and Canada.

General President Kelly’s transition team, chaired by 4th District Vice President Andrew Pantelis along with Vice Chair and Chief of Staff Matt Vinci, includes highly regarded local, state and provincial leaders, as well as elected International officers who represent IAFF members in locals large and small in all 16 districts across the U.S. and Canada. Personnel serving in these key roles will conduct a thorough analysis of programs and services offered by the IAFF and make recommendations on how to improve these programs to meet the ever-evolving needs of our members.

“As I promised during my campaign, we are committed to reviewing every program and service offered by our union to identify efficiencies, as well as areas of improvement, with the ultimate goal to provide the highest level of goods and services to our members serving on the frontlines,” says Kelly.

The transition team – which includes 21 work groups and more than 70 members selected based on their skills and expertise – is organized into three sections, with each addressing specific programs and services to be evaluated by these subject matter experts.

The Evaluation of Services team, led by Vice Chair Jay Fleming (Boston Local 718) and supported by 3rd District Vice President Jay Colbert and 6th District Vice President Mike Carter who serve as senior advisors, is tasked with providing a comprehensive review of programs and services currently offered by the IAFF. The work groups will collectively identify strengths, weaknesses and areas of improvement to ensure that only the best possible product is provided to members. IAFF Assistant to the General President Patrick Morrison will serve as the program manager for Evaluation of Services, providing leadership and guidance to the work groups.

The Non-Profits and Subsidiaries team, led by Vice Chair Kurt Becker (Professional Fire Fighters of Eastern Missouri Local 2665) will provide a comprehensive review and analysis of IAFF relationships with outside non-profit organizations, as well as subsidiaries of the IAFF, such as the IAFF Financial Corporation and IAFF Foundation. 12th District Vice President Walt Dix and Mathew Golsteyn (IAFF) will serve as senior advisors, providing sound guidance and technical expertise.

The Vision to Mission team, also led by Vice Chair Jay Fleming, is tasked with creating an action plan to serve as the blueprint for the Kelly administration to address the issues most important to the dues-paying members of the IAFF. 3rd District Vice President Jay Colbert and 7th District Vice President Ricky Walsh will serve as senior advisors to the Vision to Mission team, collectively serving as subject matter experts in membership engagement and satisfaction. Robert Green (Professional Fire Fighters of Massachusetts) will serve as the program manager, providing guidance and oversight to the work groups.

Ramagnano has knowledge of and interests in pensions, policy, procurement and Canadian operations. Roberts brings the perspective of a young, new leader, as well as his organizing expertise. As a long-time treasurer for Local 798, Buford knows the importance of managing members’ hard-earned dues. Herrera brings the perspective of another labor organization and has experience in organizing and private sector retirement and health plans. Yee understands the tremendous responsibility of protecting our union’s finances and pensions and implementing sound, ethical policies. Blackman is experienced in policy and budgets for labor unions, large organizations and companies. Abramian is uniquely positioned to inform the team on ethical practices, fiscal policies, and responsibility and asset management. Bassi has a proven track record in strategic planning and program management.

“This highly experienced and diverse transition team will work in collaboration with General President Kelly and his team with integrity, while making sure our union remains strong for decades to come,” says Líma.

At the completion of the 90-day transition phase, the work groups will have collectively created a pathway to ensure that the IAFF is stronger than it has ever been before and that we continue to provide high-level services to our dues-paying members.

Together with both transition teams, Kelly and Líma will work to build and strengthen this IAFF.