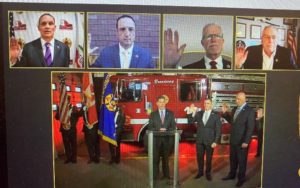 Held virtually due to the pandemic, the 55th IAFF Convention reconvened March 10 to officially announce the election results. Delegates cast their votes by secret mail-in ballot conducted by Survey & Ballot Systems (SBS). Per the IAFF Constitution & By-Laws, only registered, seated delegates are eligible to vote in the election. The certified results account for 7,148 ballots cast from 7,245 eligible ballots, yielding a participation rate of 98.66%.

General Secretary-Treasurer Ed Kelly, Professional Fire Fighters of Wisconsin President Mahlon Mitchell and Chicago, IL Local 2 President Jim Tracy declared their candidacies in the IAFF’s first contested election for principal officers since 1988. Tracy suspended his campaign because of unforeseen health reasons, making it a two-way race between Kelly and Mitchell for the top position. With 56% of the vote, Kelly was elected General President, the 10th person to hold the office in the union’s 103-year history.

U.S. Labor Secretary-Designee and Boston Mayor Marty Walsh presided over the swearing in. The IAFF Executive Board voted to make Walsh an honorary member of the IAFF; General President Schaitberger deputized him to conduct the swearing in at Boston’s Ladder 17 where both the General President-elect and former General Secretary-Treasurer Martin Pierce (1980-1982) were assigned as fire fighters.

“I have known Eddie a long, long time,” said Walsh. “He knows how to bring people together; he fights for what he believes in and for his members and his friends. He believes in getting things done. That is the kind of leadership we need in this very historic moment in time. As we come out of this global pandemic, the steps we take now will define our future.”

Closing his remarks, he said, “On behalf of the people of the city of Boston, your union and the people of St. Ann’s Parrish, congratulations.”

“I know that as a member of the presidential cabinet, the success you had helping fire fighters and the workers here in Boston will translate into a better, stronger future for our country,” said Kelly. “My first act as General President-elect is to deliver to you your IAFF membership card. What an honor it is to have you here to swear us all in.”

“When I get out of bed every morning, I will endeavor to serve with the same devotion to the oath I took today that our brothers and sisters whose names are on the wall at our Fallen Fire Fighter Memorial showed when they lived up to the oath they took by making the ultimate sacrifice,” he said. “God Bless you. God Bless the IAFF. Be you, be strong, be firefighters.”

General Secretary-Treasurer-elect Líma, who delivered his acceptance speech via Zoom, acknowledged everyone who helped with his campaign and thanked outgoing and incoming IAFF Executive Board members, stating his readiness to work together to build a stronger, united IAFF.

Líma said his priority is to bring everyone together into one IAFF. “My commitment to you is that I will lead with integrity, transparency and honesty,” he said. “I promise you that I will always do the right thing. I am committed to being a General Secretary-Treasurer for all our members, whether you voted for me or not. Now is the time to come together.”

Prior to serving the last four years as General Secretary-Treasurer, Kelly answered the call to the fire service like so many of his family members, including his grandfather, father, brother, nephew and a cousin. He responded not only to emergencies in his hometown of Boston, but also the 1999 Cold Storage Warehouse fire in Worcester, Massachusetts, and the 2001 terrorist attack in New York City. As a union leader, Kelly served as president of Boston Local 718 and the Professional Fire Fighters of Massachusetts.

“Our members voice was heard in a historic level of participation at our 55th Convention, and I’m honored and excited to be the next General President of our great union.” Kelly says. “I congratulate Frank Líma and all our recently elected leaders on their victories, and I look forward to serving with our entire Executive Board to tackle the important work for our members and their families across both countries.”

“I am humbled by the strong amount of support that I received throughout this campaign,” says General Secretary-Treasurer-Elect Líma. “Now, more than ever, is the time that we must unite, fight and organize as a labor union. I am honored to begin work representing and serving our members in Canada and the United States as the next General Secretary-Treasurer of our IAFF.”

In contested races for Executive Board positions, four district vice presidents and one trustee who faced challengers were also sworn in.

“I am excited and energized, and more than anything, I am proud to be reelected as vice president of the Mighty 11th District,” said McGhee. “I am more than ready to continue the work to ensure that every local matters.”

“I want to thank the 16th District delegates on my reelection and the great work they’re doing. We’ve seen some pretty egregious attacks from the past administration, and we fought our way through these,” said Johnson. “I also congratulate our newly elected officers. I am really looking forward to working with everyone.”

“I promise, along with my fellow trustees, Tony Mejia and Alex Forrest, we will always be diligent to ensure our financial policies are carried out,” said Ouellette. “To the members on the frontlines, thank you for your support. I promise I will be beholden to only you, the dues payers of this union.”

“I want to thank the members of the 9th District who have put their faith in me,” said Frainier. “We have great leaders in the IAFF, past and present, who have built a strong foundation for us. I will continue that tradition, working together with a unified vision and shared values for our future.”

A 33-year veteran fire fighter, Frainier comes to the IAFF Executive Board with extensive leadership experience. Joining West Metro Fire Rescue in 1987, he became active in West Metro, CO Local 1309, serving as secretary-treasurer (1998-2005) and president (2005-2018). Meanwhile, he was elected Colorado Professional Fire Fighters (CPFF) secretary-treasurer in 2012, serving in that position until he was elected as CPFF president in 2017.

“I am absolutely honored and humbled that IAFF 10th District leaders have chosen me to continue the concept we have built as Team 10th,” says Gilman. “We will have a seasoned team ready to hit the ground running so our members can continue to receive top-notch assistance and resources.”

Since 2009, Gilman has served as Local 4005 president and as staff representative for the Professional Fire Fighters of Arizona since 2012. Simultaneously, he has served as an IAFF District Field Service Representative. In these leadership roles, Gilman has responded to multiple wildfires and other disasters, helped numerous locals win collective bargaining rights and pushed for the passage of state legislation benefiting fire fighters. As a fire fighter, he worked his way up through the ranks to become captain.