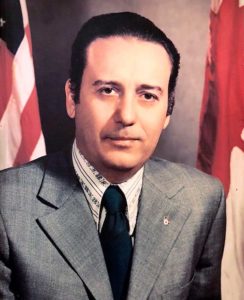 The IAFF is saddened to report the death of IAFF Secretary-Treasurer Emeritus Frank A. Palumbo on June 16. He was 90.

“During his 10 years as General Secretary-Treasurer, Frank Palumbo’s leadership kept this great union on the path to a strong future,” says General President Harold Schaitberger. “Our thoughts and prayers are with the Palumbo family.”

Palumbo first served his country when he joined the U.S. Army right out of high school. After leaving the service, he joined the Fire Department of New York and Uniformed Firefighters Association (UFA) Local 94 in 1956.

He first served Local 94 as a company delegate. Always wanting to do more for his fellow members, he continued to take on more responsibilities as Sergeant-at-Arms and then Vice President.

Palumbo was elected 1st District Vice President in 1970 and two years later, Convention delegates elected him Secretary-Treasurer, a position he held until 1980.

He is survived by Constance, his wife of 64 years, his children Barbara, Joseph and Lorraine, seven grandchildren, two great grandsons, his brother Victor, his sister Irene and many nieces and nephews.

In lieu of flowers, donations can be made in Frank’s memory to St. Jude’s Children’s Hospital.