Fire fighters from across the country participated in the National Fallen Fire Fighter Softball Tournaments in October 2020 and May 2021 in Las Vegas, Nevada. Organizers of the annual event typically donate $10,000 from the proceeds to the IAFF Fallen Fire Fighter Memorial every two years, but this year was able to give $12,500.

The check was presented May 3 at Hennessey’s Tavern in downtown Las Vegas.

“It was an honor to accept this check on behalf of the IAFF Foundation,” says North Las Vegas, NV Local 1607 President Craig Romey. “I know the foundation will use this generous donation to preserve our sacred memorial.”

Los Angeles County Local 1014 member Russell Vandemark started the National Fallen Fire Fighter Memorial Softball Tournament in 2002 in the aftermath of the 9/11 terrorist attacks to bring fire fighters together and raise money for charity. Vandemark has since passed away, but the tournament found new organizers.

Bill Malovrh, a retired member of Mentor, OH Local 1845, has been the primary organizer for the last several years. He thanks North Las Vegas Local 1607 member Ralph Thatcher and Arlington, TX Local 1329 member Cade Hall for going above and beyond to help bring the event together. 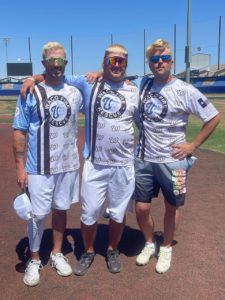 In a show of support, a team that included members of several locals from Butler County, Ohio, donated an extra $1,400. And after the team from Waco, TX Local 478 promised on Facebook to bleach their hair if they could raise a $1,000, the team raised $1,100 and left the tournament with bleached hair.