California Members Work Around the Clock to Contain Wildfires

Updated November 1 –Wildfire conditions remain critical throughout California, but especially in southern California as new fires continue to ignite and more residents are forced to evacuate.

Collectively, thousands of IAFF members are on the frontlines of these fires.

“In the air and on the ground, our members have been able to save hundreds, if not thousands of homes,” says 10th District Vice President Frank Lima. 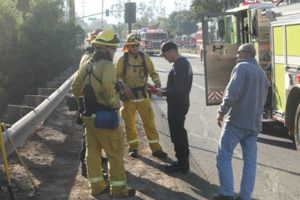 Meanwhile, the IAFF Disaster Relief Go Team has been focusing on members who live in the path of these fires. Through a massive outreach effort, the team has been determining whether any members’ homes have been lost or damaged and assessing any other membership needs.

The long-range goal for the IAFF’s response team is to position resources throughout the southwest, enabling team members the ability to provide assistance more quickly.

More than 4,500 fire fighters – most of them IAFF members – are on the scene of the Kincade Fire in Sonoma County in northern California, where more than 75,000 acres have burned. At least 429 members live in the mandatory evacuation areas.

Meanwhile, new fires, including the Getty Fire, are threatening areas in southern California. Located in Los Angeles City near the Getty museum, this fire is in a densely populated area with approximately 10,000 residential and business structures. This area has not seen rain since May.

Progress has been made on these fires, but red flag conditions are expected, which will likely cause the fires to grow again and make containment increasingly difficult.

The IAFF has dispatched a disaster relief Go Team to assess membership needs across the state. General President Harold Schaitberger says, “The safety and well-being of our members is our number-one priority. The International stands ready to send more resources as needed.”

General Secretary-Treasurer Edward Kelly adds, “Our members are going to be on the frontlines of these fires, away from their families for weeks to come. This IAFF is going to make sure they know we have their back.”

“We are staying on mission to assist our members,” says 10th District Vice President Frank Lima. Disaster relief operations have been established at the Santa Rosa Local 1401 union hall where resources are available.

The Kincade Fire, which began October 23, spread rapidly when the area came under a red flag warning as winds gusted up to 100 miles per hour, with high temperatures and low humidity.

“It was really looking like the wind was going to take this fire into some heavy population centers, including the Town of Windsor where several IAFF members live,” says Santa Rosa Local 1401 President Tim Aboudara, who is also a member of the disaster relief Go Team. “But fire fighters were able to slow the fire and reduce the amount of potential damage.”

Of additional concern are the Glen Cove Fire just north of Oakland and south of Crockett in Vallejo and the Sky Fire in Contra Costa County.

The IAFF will continue to update this story as new details emerge.