As most restaurants are closed or providing limited service due to COVID-19, the Wahlberg family – owners of the Wahlburgers restaurant chain – is giving back to fire fighters and other first responders on the frontlines of the COVID-19 pandemic.

Wahlburgers launched the #WhateverYouNeed campaign to feed frontline workers in the United States and Canada over a period of nine days.

The Wahlbergs – including Walburgers founders Chef Paul Wahlberg and actors Donnie and Mark Wahlberg – grew up in Boston’s Dorchester neighborhood, as did General Secretary-Treasurer Ed Kelly.

“During this COVID-19 pandemic, my family knew we had to step up and make a difference for the people on the frontlines and people in need,” says Mark Wahlberg. “So, with my brother Paul’s talents, we decided to serve as many meals as we could.”

The problem was how to deliver 30,000 meals throughout the United States and Canada. That’s when Wahlberg called on his old pal, Ed Kelly, for assistance. “I want to thank the Wahlbergs for their generosity,” says Kelly. “Our brother and sister fire fighters are working side-by-side with other first responders, serving citizens during this deadly pandemic. We are all in this together. The #WhateverYouNeed campaign is the perfect demonstration of that concept.”

Working through their district vice presidents, affiliates in the United States and Canada are hosting #WhateverYouNeed events. Wahlburgers provided the meals, and IAFF members distributed the food to their fellow fire fighters, as well as to police stations, medical facilities and locations served by other first responders. 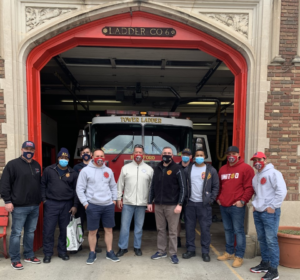 “Local 854 President Jake Lamonda and I are proud to host this event benefiting our members and other first responders across the city,” says Local 94 President Fitzgerald. “This pandemic has challenged all of us. It’s nice to be able to distribute a bit of goodwill.”

In Detroit, the #WhateverYouNeed campaign is a two-day event. “Our members have been working hard with other first responders to protect the public during these unprecedented times,” says Local 344 President Tom Gehart. “We are thankful for all the hard work from everyone involved to make this event happen.”

The campaign runs through May 15. Learn more about this partnership and Wahlburgers’ current efforts with the #WhateverYouNeed campaign.