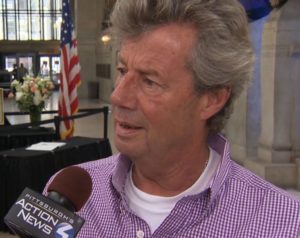 The IAFF is saddened to report that one of its longest-serving leaders and labor champion, former Pittsburgh Local 1 President Joe King, passed away on February 9, 2021.

“Brother King was a tireless advocate for safe working conditions, wages and benefits for Pittsburgh Local 1 members and workers across the state of Pennsylvania. His passing is a tragedy for the entire labor movement,” says General President Harold Schaitberger. “On behalf of all 324,000 IAFF members, our thoughts and prayers are with the King family and the entire Local 1 membership.”

“Joe was an idol of mine, a quintessential IAFF leader,” says General Secretary-Treasurer Ed Kelly. “He was a straight talker, a proud Vietnam veteran whose brother was killed in action. He dedicated his entire life working to make things better for Pittsburgh fire fighters. My condolences to the family, Local 1 members and everyone who knew him well.”

King began is career with the City of Pittsburgh Bureau of Fire in 1974 and quickly joined Pittsburgh Local 1. As a fire fighter, King spent most of his time working on a rescue squad and was well-respected among his brothers and sisters.

He joined the Local 1 Executive board first as the public relations chair. Recognized quickly for his leadership skills, King was elected as Local 1 Trustee in 1980, began serving on the local’s health and safety committee in 1984 and was elected vice president in 1986. In 1988, he was elected Local 1 president, a position he kept until his retirement 26 years later.

During his tenure, he worked to secure 14 contracts under seven fire chiefs and seven mayors. His accomplishments on behalf of his membership are too numerous to count, but some of them include securing four-person minimum staffing per apparatus, a no-layoff contract clause, cancer and infectious disease presumption and other key healthcare contract provisions for fire fighters and their families.

King also kept a regular presence at the state capitol to support legislation benefiting professional fire fighters and to testify against legislation harmful to labor.

He also served on the board of trustees for the City of Pittsburgh’s Firemen’s Relief and Pension Fund, the Pennsylvania Governor’s Health and Safety Committee and the Governor’s Fire Advisory Board. In addition, King was a speaker for the Pennsylvania AFL-CIO and an advocate for Public Sector OSHA laws.

He retired at the age of 65 in 2014, succeeded by current Local 1 President Ralph Sicuro.

“Joe displayed immeasurable talent with uniquely special charisma, passion and creativity to his job and protecting our members’ wages, retirement benefits, healthcare and especially our safety,” says Sicuro. “Joe was not only a warrior for our members, but he equally loved and fought to protect the residents of the City of Pittsburgh.”