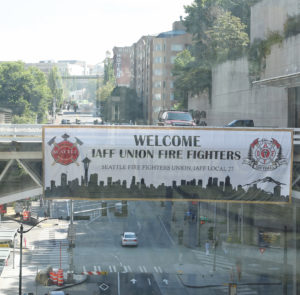 More than 3,100 delegates, alternates and guests from across the United States and Canada gathered in Seattle, Washington, August 6-10 for the IAFF 54th Convention and to celebrate a century of progress and prepare for a bright future.

“It was over 100 years ago that the initial spark of unionism hit our profession,” said General President Harold Schaitberger in his state-of-the-union address during the dramatic Opening Ceremony hailing the IAFF’s history and 100 years of unity. “Over the next century, that spark lit the flame that has burned brighter and brighter as all of us together built this powerhouse of an IAFF. Now, the challenge to be great for the next 100 years comes to all of us. It’s now our turn to be pioneers.”

Delegates took a trip through IAFF history beginning with its formation in 1918 when fire fighters worked around the clock with little to no time off and only a helmet and the shirts on their backs to protect them in a fire.

Through strong leadership and political gains, the IAFF has made enduring improvements in working conditions, wages and benefits for all members, and has served as a pioneer in researching occupational diseases, advancing fire-based EMS, enhancing turnout gear and safety equipment and addressing behavioral health in the fire service.

Schaitberger charged delegates with ensuring affiliates have the resources to protect our members until we celebrate the second centennial. “Let’s stand together for the future generations of fire fighters who are counting on us,” he said.

Welcoming delegates to the 54th Convention, Seattle Local 27 President Kenny Stuart said, “Local 27 is deeply committed to our members, the labor movement and the great city of Seattle. We are excited and honored to host the IAFF Centennial Convention.”

He said, “Our predecessors laid a foundation and built an organization that we can all be proud of,” noting that great work has been done, but it is not finished. Delegates gathered on the closing night of Convention for the 100th Anniversary Gold and Black Gala, which raised more than $1.4 million  to benefit the IAFF Foundation, which provides assistance to members following natural disasters, funds scholarships for the children of our fallen, keeps our Fallen Fire Fighter Memorial in Colorado Springs maintained so we can continue to honor those we’ve lost and ensures our members who are burned get the best care possible and that their families can be with them. Thank you to everyone who supported this centennial celebration and helped our IAFF Foundation support our members and their families in their times of need (see pages 16-17 for the full list of sponsors). Delegates at the IAFF 54th Convention welcomed a voice of solidarity and unity from across the pond — General Secretary of the United Kingdom’s Fire Brigades Union (FBU) Matt Wrack congratulated the IAFF and Convention delegates on the International’s 100th anniversary while expressing solidarity on issues including trade unionism and fire safety standards. “We live in times when many politicians tell us that trade unions are a relic from the past, dinosaurs from a bygone age,” he said. “But today, more than ever, trade unions are necessary to defend fire fighters and to protect our interests.” During the first day of business, Nationwide President John Carter presented General President Harold Schaitberger with a check for $150,000 to benefit the IAFF Foundation. “We are grateful to be here celebrating this remarkable centennial anniversary,” said Carter. Noting that the Nationwide relationship spans 15 years, Carter said, “We have donated close to $750,000 to the IAFF Foundation. We’re very proud of that.”

He continued, “At Nationwide, we give back to communities just as all of you do every day, and this is one small way for us to say thank you and for us to demonstrate support of the hard work you do every day for those who are in need when crisis occurs.”

General President Harold Schaitberger said, “I can’t say enough about this incredible business relationship — you have gone above and beyond, and we thank you so much.” Washington Governor Jay Inslee, a longtime supporter of the IAFF and the labor movement, vowed to always be on the side of labor. As the IAFF and its state and provincial associations continue to fight on the frontlines to address important labor concerns, including the right to form a union and ensure members who get sick on the job are covered by workers’ compensation, Inslee pledged to be part of the fight and to provide his full support. Just this year, Inslee signed legislation creating a presumption for fire fighters, law enforcement officers and emergency medical technicians who are diagnosed with post-traumatic stress from on-the-job trauma exposure. He also signed a bill outlawing a class of carcinogens (perfluorinated compounds or PFAs) found in firefighting foam. n a heartwarming moment, MDA Ambassador Natalie Olson — who is among the first to be treated for spinal muscular atrophy (SMA) with Spinraza, the first-ever FDA-approved therapy for SMA in 2016 — told delegates, “Thank you fire fighters for being who you are. Happy 100th anniversary.”

After just one dose, Natalie saw immediate improvement, and after several doses was able to realize her goal to walk down the aisle at her 6th grade graduation two years ago. Diagnosed when she was just two years old, Natalie’s father, Dan Olson, said, “We felt like our lives were on fire,” but credited MDA for its tremendous support and encouragement and thanked IAFF members for their part in raising funds to make the research possible to develop drugs like Spinraza that are giving hope to families like his.

“Thank you — each and every one of you — for standing outside, whatever the weather, advocating for our family. You are putting out the flames and bringing us hope. You’re changing lives. You’ve forever changed ours.” Just a few days before the Democratic primary in Wisconsin, gubernatorial candidate and Professional Fire Fighters of Wisconsin (PFFW) President Mahlon Mitchell addressed his union brothers and sisters to commemorate the 100th anniversary of the union. He talked about the great things fire fighters can accomplish if they do it together, “You know who pushed President Gerald Ford to sign a law that guarantees federal support to families of fallen first responders? Fire fighters. You know who answered the call on that fateful day in 2001 and will forever be etched into this nation’s memory? Fire fighters.” Despite an aggressive campaign, Mitchell fell short in the August 14 primary. Taking their place among IAFF fire fighter delegates from across North America were delegates from Montreal, QC Local 125, which reaffiliated in October 2017 after an absence of more than 40 years. General President Harold Schaitberger welcomed Local 125 back to the IAFF Convention in his opening address. “Bienvenue chez nous à l’AIP,” he said in French to a warm round of applause from delegates and guests.

Ross said that after the re-affiliation, it was important to attend Convention right away and to start participating in the International’s democratic process. “It’s important to be at the table and have a voice.” As one of the final pieces of business at the IAFF 54th Convention, delegates voted on the site for the 56th Convention in 2022. Delegates overwhelming voted in favor of Ottawa, Ontario, following an enthusiastic presentation by Ottawa Local 162. “An IAFF convention has not been held in either country’s capital city since 1918,” said Local 162 President Peter Kennedy. “It will be an honor.” IAFF leaders across the United States and Canada go above and beyond the call of duty to protect the interests of our members. At the IAFF 54th Convention, 16 affiliate leaders, one from each district, were honored with an IAFF Local Leadership Award for their accomplishments in serving their locals and the union.