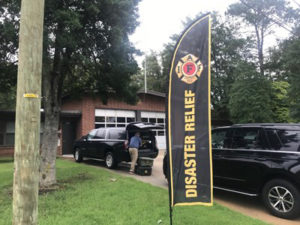 As Hurricane Florence set its sights on the Carolinas, the IAFF quickly activated a disaster response plan to support our members, who as of press time, remain on the frontlines performing rescues in catastrophic flooding and dangerous conditions.

“Even though our members suffered damage to their own homes, they keep working for hours on end doing everything in their power to keep their communities and those they work with safe,” says General President Harold Schaitberger. “So we are on the frontlines for our members and their families for as long as needed.”

Using state-of-the-art GIS mapping to determine the locations of more than 9,000 members in the storm’s path, even before the storm hit, the IAFF immediately deployed disaster relief teams to the region, establishing two command centers in the Carolinas — one at the Columbia, SC Local 793 union office and a second at a Raleigh, NC fire station secured by Local 548 — to provide resources on the ground to rapidly assist members.

Florence made landfall as a Category 2 hurricane near Wilmington, North Carolina, causing catastrophic damage as 20-40 inches of rain fell in some areas as it made its way slowly towards Myrtle Beach and Charleston, South Carolina. Although the storm was moving into the Northeast, water levels from several rivers continue to rise 9-13 feet above normal, making disaster relief response difficult.

At press time, disaster relief teams had met with three locals on the coast — New Hanover, Wilmington and Leland — where members were reported to be spending in excess of 72 straight hours in the fire stations. IAFF disaster relief teams had also been able to reach Jacksonville, North Carolina, which had been completely cut-off for several days by high water, to assist members of Jacksonville Local 4249. Teams were also able to find a route into Wilmington, which had been completely cut off due to flood waters. An additional IAFF team is scheduled to make contact with members of Myrtle Beach and surrounding coastal South Carolina locals.

Disaster relief operations are expected to continue, as flooding is forecast to worsen. The IAFF will be on the ground, providing any assistance needed and ensuring our members are safe.

Working alongside the IAFF is the Healing Emergency Aid Response Team — HEART 9/11 — a team of former FDNY and NYPD members who formed after September 11 to use their training and experience to respond to natural and man-made disasters.

The assistance we provide our members impacted by hurricanes, floods, tornadoes, wildfires and other disasters is through our Disaster Relief Fund. The best way to help your brothers and sisters in need is to make a donation online at my.iaff.org/disaster or by check to IAFF Disaster Relief Fund, 1750 New York Avenue, NW, Washington, DC 20006.