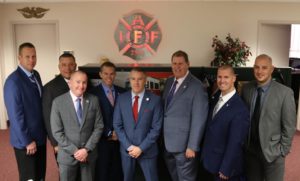 Thanks to the staunch support of Florida State Representative Matt Willhite – an active Palm Beach County fire fighter and member of Palm Beach County Local 2928 – and the lobbying efforts by the Florida Professional Firefighters (FPF), the IAFF and its affiliates, a law granting benefits to fire fighters who develop cancer became effective July 1, 2019.

As a thanks for his support, the FPF named Willhite Florida Professional Fire Fighter of the Year for 2019, while his home local presented him with a lighted stainless-steel IAFF logo to display in his office.

“We attempted to pass a similar law over the years. I know we could not have done it this time without Brother Willhite’s support and influence,” says 12th District Vice President Walt Dix. “This is a great example of why we work so hard to elect our own.”

“We are very proud of what he does not only on behalf of Local 2928 members, but for all Florida members,” says Palm Beach County Local 2928 President Scott Bielecky. “We wanted to make sure he knew that we appreciate everything he does.”

Since Willhite took office in November 2016, he has championed the push for cancer presumption and PTSD coverage for Florida’s fire fighters.

Not long after the law was passed, its strength was tested as the City of St. Petersburg tried to deny benefits to St. Petersburg Local 747 member Jason Francis, who had been diagnosed with thyroid cancer in January 2019 after months of visits to doctor after doctor trying to determine why he didn’t feel well.

The doctors recommended removing his thyroid and 53 lymph nodes to ensure the cancer was gone. The surgery was a success, but recovery has been difficult.

“My health insurance through the city was covering a lot of the medical cost, but insurance is no help when you run out of sick leave,” says Francis. “It became a real struggle for my family going from two incomes to one. I put in for the benefit, but I was denied.”

The City of St. Petersburg said that Francis was denied coverage because he was diagnosed prior to the law’s enactment.

“The IAFF family, including 12th District Vice President Walt Dix and the FPF work as a team to assist our members when they need us,” says St. Petersburg Local 747 President Richard Pauley. “We felt Brother Francis’ case was worth fighting, so we asked our longtime attorney Robert McKee to file a lawsuit.”

The circuit court judge found in favor of Francis, noting that the law did not include any language preventing fire fighters diagnosed prior to the law’s enactment from receiving benefits.

“Now we know this law is strong enough to stand up against the opposition,” says FPF President Wayne Bernoska. “We will fight any local government that tries to deny benefits to our members diagnosed with cancer.”

The new law provides full medical coverage for 21 cancers. The coverage is provided through an employer-provided group health plan rather than through workers’ compensation and includes a one-time, lump-sum payment of $25,000 to fire fighters upon a cancer diagnosis, time off for treatment and rehabilitation, and all copays and deductibles. These 21 cancers are considered line-of-duty and include an enhanced death benefit.