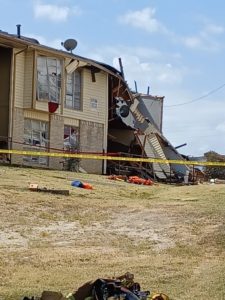 Four Dallas, TX Local 58 fire fighters were among seven injured in an explosion September 29 at an apartment building in southern Dallas. All four fire fighters were transported to nearby Parkland hospital with two in critical condition.

As of this morning, three of the fire fighters remain in critical but stable condition, each with burns covering approximately 30 percent to 40 percent of their bodies, one of whom is intubated. The fourth fire fighter has been released from the hospital with minor injuries.

“We are so thankful for everyone reaching out to us. Three of our members face a long road to recovery, but we will be with them for the entire journey,” says Local 58 President Jim McDade.

The three civilians injured were reportedly in stable condition.

The fire fighters responded to a midmorning 9-1-1 call of a natural gas leak at an apartment building one mile west of Interstate 45. Fire fighters reportedly smelled gas on the scene. The explosion caused part of the building to collapse and is believed to have occurred as fire fighters were entering the building.

The IAFF is prepared to provide full support and resources to help those injured and their families.

The fire was put out around noon Wednesday, September 29.

We will continue to update this story.