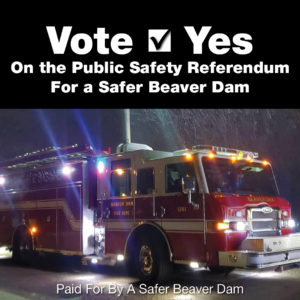 The Citizens of Beaver Dam, Wisconsin, voted overwhelmingly November 3 to approve a referendum to increase the tax levy to fund the hiring of six new fire fighter/paramedics. With the referendum’s approval, the finalized mill rate for the city budget will be $9.46 per $1,000 of property value, or $946 in taxes on the value of a $100,000 home.

“Having six new fire fighter/paramedics will enable us to better serve the community without exhausting our members with excessive amounts of overtime,” says Local 3432 President Tony Thomas. “We especially want to thank the IAFF for assisting us with all aspects of our campaign.”

After much debate between the Beaver Dam Common Council and the Police and Fire Commission, a compromise emerged in favor of a referendum to fund the six new fire fighters.

Door-to-door canvassing and other forms of campaigning were not possible due to the COVID-19 pandemic, so Local 3432 turned to 5th District Vice President Tom Thornberg for guidance. Thornberg connected Local 3432 to IAFF resources to help execute a campaign.

“The IAFF was with us every step of the way,” says Thomas. “From help with campaign strategy and messaging. to the development of yard signs, mailers and ads, the International provided invaluable service and support. We could not have done it without them.”

Bringing in the new hires will take a huge weight off the shoulders of the current fire personnel, but the second fire station and the full-time inspector and training chief are still critical needs. Addressing those needs will be Local 3432’s next priority.