“Brother Syvret is dedicated to helping others, whether it’s as a fire fighter or as a union member,” says Southwest Florida Professional Fire Fighters Local 1826 President John Duncan. “I commend his department for honoring his accomplishments with its Firefighter of the Year Award.”

“I am honored and humbled to receive this award,” says Syvret, who serves as an ARFF technician for his department. “Everything I did as part of the IAFF disaster relief response and the RSW fire, I did as part of a crew. Those were both tough situations that could not have been accomplished alone.” 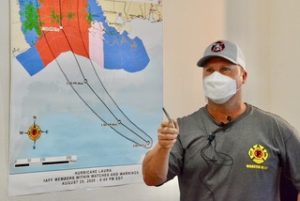 2020 was a very active hurricane season. In response, IAFF disaster relief operations provided assistance to members in the affected regions. Syvret was part of the IAFF response to Hurricanes Laura, Sally, Delta and Zeta.

“The hurricanes came one right after another this season and Brother Syvret answered the call every time we needed him,” says 12th District Vice President Walt Dix. “He was a great asset to us in the field and very deserving of his department’s Fire Fighter of the Year Award.”

“From tarping leaky roofs to removing downed trees from the yards, I was proud to be part of that response and plan to continue to be a part of the disaster relief efforts,” says Syvret. Syvret’s department also recognized him for his dedication to duty when thousands of rental cars ignited at RSW in April 2020. Due to the pandemic, some 6,000 rental cars were sitting unused in an open area near the airport.

One of the first fire fighters to arrive on scene, his department members say Syvret spent hours discharging thousands of gallons of water and foam on the fire at RSW.

The fire was difficult to get under control as wind continued to fuel the blaze, but Syvret did not back down until the job was done. When the fire was out, about half the cars had sustained damage.

Syvret completed his Fire Officer I certification in 2019 and is currently working on his Airport Master Firefighter certification from the American Association of Airport Executives (AAAE).