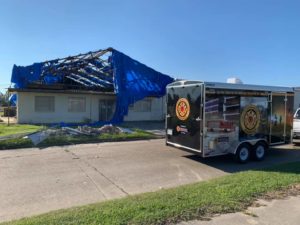 Updated October 13: The IAFF Disaster Relief Go Team is wrapping up relief operations in Louisiana and Texas. The team has been assisting members impacted by Hurricane Delta since the storm left on October 10.

The team helped 40 members with home and property repairs and handed out 106 Disaster Relief Fund cards to those in need. Nine additional disaster relief applications are currently being processed. Meanwhile, the peer support team was on site to assist members who had dealt with both Hurricane Delta and Hurricane Laura which had come through just six weeks earlier.

Updated October 11: The IAFF Disaster Relief Go Team is responding to calls for assistance in Louisiana and Texas now that Hurricane Delta has moved through the area. Thus far, the team has received 29 calls for assistance from Louisiana and one from Texas. Most of the calls are from members previously affected by Hurricane Laura who need their homes retarped. The team will stay on site until all membership needs are met.

Meanwhile, the IAFF Communications team is also in the area of impact. They began making firehouse stops in Louisiana on October 9, advising members that the IAFF was already in town and ready to help.

Updated October 10: Hurricane Delta made landfall along the southwestern coast of Louisiana October 9 as a Category 2 storm, causing more damage to an area still recovering

from Hurricane Laura, which hit just six weeks ago.


“Our Go Team was on the ground before the storm, and will begin providing assistance to our members immediately,” says General President Harold Schaitberger. “I have authorized full use of the IAFF’s resources for as long as our members need it.”


According to the IAFF’s mapping system, nearly 1,100 members live in the area of highest impact. Go Team members are contacting these members, including the 88 members in the Lake Charles area who had property damage as a result of Hurricane Laura.


Determining the full scope of the impact  on members in the region could take days as flooding and storm debris have made many roads impassable.


The disaster relief team is ready to assist with home repairs and financial relief. Meanwhile, two peer support teams and a clinician are also available to members in need.

The IAFF will continue to update this story as more details become available.


The best way to help your brothers and sisters is to donate to the IAFF Disaster Relief Fund.