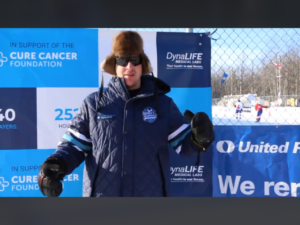 Andrew Buchanan, a fire fighter/paramedic with Strathcona County, AB Local 2461, is one of 40 brave people who laced up and endured frigid temperatures in February to participate in a fun and record-setting initiative while raising money for a great cause. Buchanan participated in the 7th edition of the World’s Longest Hockey Game, which took place over 252 hours February 4-15 in Sherwood Park, Alberta.

Participants took to the ice in shifts spanning up to eight hours while braving temperatures that plummeted below -50C (-58F), with wind chills during the game cold enough to break pucks. The initiative raised funds for the Cure Cancer Foundation, a charity that supports a local clinical study in lymphoma and tumor patients, with a fundraising goal of $1.5 million.

Buchanan, a goalie, is fundraising toward his own goal of $100,000 in direct pledges. Buchanan has challenged IAFF locals to donate to his personal amount. He has dedicated his participation in the match to all first responders across Canada who are affected by cancer. A video about the event was played at the recent IAFF 55th Convention, and numerous IAFF locals from Canada and the U.S. generously donated. In an interview during the match, Buchanan described the multiple layers of clothing he wore, the battery-powered socks that were a “game saver” and the firefighting balaclava he wore over his helmet. He also described other players with their eyes frozen open and who couldn’t blink. But he said that while the bitter cold conditions players endured during the game were a challenge, they were nothing compared to the struggles faced by those coping with cancer.

Strathcona County Local 2461 President Andrew Spence says he is proud of Buchanan and his role in the game. “In an industry that’s going through hard times with COVID, this initiative has really been great at raising morale and focusing on a cause other than COVID. Being able to have support from locals across the IAFF has been pretty cool.”