First Place: “Beyond The Flames”

“200 men answered a fire alarm in Chester. Illness and death have haunted the group ever since.” The Aftermath of the Wade Dump Fire in 1978 in Chester, Penn. was the focus of this interesting and tantalizing series. The stories published capture the still unfolding tragedy of suffering fire fighters, their families and citizens.

These articles highlight the importance of media in educating the public about the consequences of chemical fire on fire fighters, and how they fight death to their last breath. This series was largely responsible for the introduction of presumptive Cancer legislation in the state of New Jersey. It’s an unforgettable episode that should be told to future generations.

Second Place: “After the Fire”

Fire in a student lounge in the freshman dormitory at Seton Hall University changed the lives of students Shawn Simons and Alvaro Llanos forever.

This feature is an excellent example of love, courage, hope and triumph. It is a pictorial essay focused on the treatment and recuperation of victims of the Seton Hall University Dormitory Fire that received national attention. The story pushes you to read on, but the chilling pictures make you want to stop turning the pages.

“There was a child on the first-floor landing, a child upstairs in the hallway, next to an adult, and a young person in the back bedroom upstairs,” said Fire Lt. Ross Caudill. “I brought the one child out. I thought he was alive. He wasn’t.”

The four news articles by Diana Lewis encompass the stages of a fire incident and the broad range of emotions experienced by fire fighters and victims during and after a fire that engulfed a home in quiet neighborhood of Ashtabula. The fire killed two children, ages 2 and 4, their 22-year old mother, and her teenaged sister.

“The men of fire station No. 52 know how to do turkey right.” This story about fire fighters turned cooks in the fire station is a unique and interesting narration that can whet the appetite of any reader. It’s a rare glimpse into the organized chaos of on-scene response where Fort Worth Local 440 fire fighters are seen treating fire victims on Avenue N in Fort Worth. Fire fighters saved lives of two out of four children trapped in the blaze.
Fort Worth Star-Telegram
Photo by: Glen E. Ellman
Submitted by: Ft. Worth, TX Local 440

A view into the hell of fire. Fire fighters of Local 437 encounter intense flames and heat as they try to extinguish a house fire in Bremerton. Despite their herculean efforts, two teenage girls perished in this early morning inferno.
Sun
Photo by: Larry Steagall
Submitted by: Bremerton, WA Local 437 Megan Conlon (left), stepdaughter of Lt. Scott Gillen and other family members and friends attend the funeral of the Local 12 member who was killed on Dec. 24, 2000 in Chicago. This photo captures the agony and pride that a family feels when tragedy strikes home.
Chicago Sun Times
Photo by: Jean Lachat
Submitted by: Chicago, IL Local 2 Fire fighter Dan Squires of Local 321 holds a 3-year-old boy he rescued from a house fire in Racine, a nice shot that reminds everyone of what saving a child’s life means to a fire fighter.
The Journal Times
Photo by: Tim Stein
Submitted by: Racine, WI Local 321

Detroit L 344 firefighters James Babich, left, and Eric Jurmo hand off a 4-year-old boy who was rescued during a gruesome fire. A Newington L 1313 firefighter wipes his forehead as extreme heat and flames billow from a storage unit building at Allard’s Moving and Storage. Boston L 718 firefighter waits for water as flames explode from the Upper-floor window of a home in Sagamore Street in Drochester. 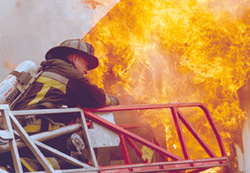 L 2452 Firefighter John Zellman is assisted in removing his self-contained breathing apparatus (SCBA) after working at the scene of March 1999 house fire. Award-winning fire photographer Gene Blevins captures the searing heat of this solid wall of flame fueled by a raging brush fire in the tinder-dry foothills of Southern California. An overall view of the building engulfed in flames in the 400 block of High Street after the blaze rekindled and spread to adjoining units. It took L 2773 firefighters about 40 minutes to bring the blaze under control at the Jefferson-South of the James apartment complex. First Place: “Give Thanks to Everyday Heroes of Ladder 7”

First Place: Cause for Alarm

Second Place: In the Line of Duty

CFTO-TV
Reported by: Derwyn Smith
Submitted by: Toronto, ON Local 3888

This site is very impressive, with comprehensive news and information about all happenings related to the fire fighters and their community at the county, state and federal levels. It has an extensive list of links containing progressive information about the executive board, affiliations, local sports and events, free emails, classifieds, archives, honors. This is a well-balanced quarterly publication with an excellent array of newsworthy articles from the local area as well as from across the international. The magazine is well laid out with fine graphics and colorful pictures.

This publication is unique because it addresses all the topics from a member’s perspective. It has an extensive array of articles that are not only exciting and news worthy, but also address matters related to the union at the local and federal levels.

This multimedia project is a very powerful and comprehensive member orientation program. It gives an insight into the history of unionism and its benefits for professional fire fighters. The handbook along with the video contain brochures with details about local unions, membership services, local contracts, and what it means to be a union member. It’s an excellent effort to involve new members and keep them for a lifetime.

This was a unique public relations effort by Portage’s professional fire fighters. The video was self-produced and perfectly blends fire fighters’ professionalism and humanity. It is a humorous yet effective promotion.

These two entries were short and to the point. They project fire fighters as life savers and as a welcome sight, and ask the community to support the fire fighter’s cause and the local union’s agenda.