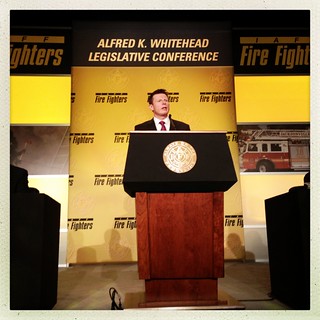 IAFF members set off to meet lawmakers on Capitol Hill Wednesday. Nearly 700 members from across the country are in Washington, DC to discuss the challenges that first responders face each day.

Many IAFF affiliates are concerned about the sequestration and its effects on the fire service and want to tell their elected representatives and senators to end the shenanigans.

For fire fighters, sequestration requires automatic, across-the-board cuts to the majority of federal programs, projects and activities, including Staffing for Adequate Fire and Emergency Response (SAFER), Assistance to Firefighters (FIRE Act) and Fire Prevention and Safety (FP&S grants). Less money is available, resulting in fewer and smaller grants awarded. It is also possible that the application period for all three grants currently scheduled for later this year will be delayed. Fire fighters on Capitol Hill will also discuss pensions, concerns about mandatory Social Security coverage for fire fighters, political attacks on public employees and support for SAFER and FIRE Act grants.

Because of its political principle to support those who support fire fighters and the relationships that IAFF leaders have with their elected officials, this union has won significant legislative victories on Capitol Hill.

Wednesday’s visit is a good time to strengthen relationships with lawmakers and to discuss issues that affect IAFF members — such as safety and job security. Throughout the day, IAFF affiliates have been tweeting about their meetings today.

Day Two of the IAFF Legislative Conference brought a mix of big name politicians and journalists to address IAFF members.

Senator Charles Schumer (D-NY) told the audience gathered at the Washington Hilton that fire fighting embodies the best of American values and tradition.

“I know what you do,” he said. “You are incredibly fine people.” Schumer said there is a movement underfoot to undue all the good that has happened in the past 60 years for middle class families.

As a result, Schumer has taken a tough stance on tax reform, proposing a plan to ensure additional tax revenues are matched by an equal amount in spending cuts. He said tax reform should not be balanced on the backs of middle class families and no plan without extra revenue will pass on his watch. Schumer ended his remarks by praising fire fighters and said he’ll never forget the important service and sacrifice they make to their communities every day.

Democratic candidate for governor of Virginia Terry McAuliffe said he wants everyone to have an opportunity to get to the middle class. For that to happen, collaboration and communication are needed to help grow the state’s infrastructure.

Now Playing at a Theater Near You

“It isn’t a comedy, it is a horror show for middle class families,” he said.

There is a mentality on Capitol Hill where nothing is getting done and it is becoming a way of life, he said.

Sarbanes discussed plans that would finally allow federal fire fighters to trade shifts. He is optimistic about legislation passing this session.

Representative Linda Sanchez (D-CA) gave a spirited speech where she said conservatives are trying to break the backs of middle class families.

“But you know this is going to come back and bite them in the [email protected]!,” she said to cheers. “There are some extreme forces pushing the United States to the brink and hurting hard-working American families.”

Sanchez said it is time for House Republicans and Democrats to come up with a sensible plan to fix the sequester. The California lawmaker said the fix should not include putting fire fighters into a mandatory retirement system.

Politico’s Mike Allen and the Cook Report’s Amy Walter gave some interesting assessments about the 2014 and 2016 races. Next year will be a crucial election year with more than dozen state governorships up for grabs.


IAFF General President Harold Schaitberger laid out the political challenges facing fire fighters at the opening of the IAFF Legislative Conference where members are gathered in Washington, DC this week.

“It is our job to make sure those in a position of authority whose decisions can make a difference between whether our members get what they deserve, or get the shaft know exactly where we stand,” he said.

The Conference got off to a witty start with President Obama’s re-election campaign manager and Organizing for America’s Jim Messina, who gave an overview of the 2012 elections. Messina said money is changing everything in politics – making grassroots efforts more important.

“The Koch Brothers will always have more money, but we have a true grassroots campaign that will make a difference.” Messina also said some lessons learned from last year’s election is that campaigns must use qualitative data in a new way and not rely on one method to reach voters.

Daniel Valenzuela
The 700 fire fighters and paramedics in attendance at this year’s IAFF Legislative Conference heard from one of their own.

“Fire fighters have a unique perspective on what it means to serve,” he said. “We don’t get to pick and choose who we serve.”
Valenzuela felt the pull to serve early and wanted a chance to make things better around him in his community. “Strong unions are the foundation of a strong middle class in America,” Harkin told the audience.

He is deeply concerned about the cuts that are making the middle class less secure. Harkin said there is a pension deficit happening in the country, noting that most Americans have less than $10,000 in retirement savings. He says the d

ivide between the “haves and the have nots” is contributing towards the disconnect that is being felt in  America today.

“Rather than tear public employees down for your pensions – let’s build everyone else up to have the same economic security.”

Claire McCaskill
Missouri Senator Claire McCaskill said the middle class is the beating heart of America and public servants are its rhythm. In 2014, fire fighters will play a crucial role in the mid-term elections. McCaskill said she hopes fire fighters will continue to be good to those who support them in Congress, and promised to be there for fire fighters when they need help. “Fire fighters don’t do wobbly. Someone was there for you and you have my deepest respect and loyalty,” she said.